A picture from life 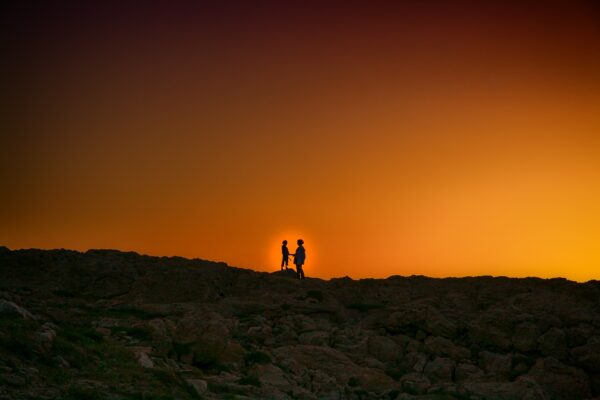 I will never forget that boy’s name. His eyes were watery even as he laughed. I only saw him in my classes for a year, but I still remember the extraordinary warmth of his hands.

Karolek (Karol) was six years old when he joined the preschool group. It was a so-called integration group. Among healthy, smiling children, I saw little ones with grimaces caused by the effects of various diseases. When I saw this child for the first time, his eyes were hidden behind round glasses. He did not look directly into anyone’s eyes, as if he did not want to see the reaction to his appearance in them. And he looked like his peers, except that everywhere, even in his hair, there were brown plaques of calloused skin covered with ointment.

My classes always started with walking with hands on hips. After the children marched into the rhythm room, I played a welcome melody on the piano to jogg and jump in the rhythm. We sang merrily: “Time for rhythmics, time for music, time for singing and playing.” We repeated this twice so that I would have time to send a smile to everyone. I tried to catch the eyes of individual children and focus their attention on myself. After the greeting, I approached the children and in a few words encouraged them to play for the first time. Mostly, it was a song performed in a large circle, followed by pairing, so before I started playing, I suggested to the children to decide with whom to dance with and stand next to the selected person. When there were an odd number of children, I would stand by the child for whom my friend did not have enough and turn on the accompaniment from the tape recorder.

It was like that this time. The children paired up, and I stood by the little boy with glasses, whom no one ran to, and when the opening melody to the song sounded, I automatically extended my hands to his hand. He hid his hands behind his back. He didn’t meet my eyes. In a split second I noticed brown changes on his skin that covered part of his face and neck. I must admit that when he reached out to me at my encouragement, I felt discomfort. I saw that the skin of his tiny hands was covered with brown thickenings. I didn’t saw, that most of the skin on his body look like this because he had long sleeves. I quickly broke my resistance and reached for his hands.

It turned out that I had never before held hands that were so warm. The little boy looked up and I saw his smiling teary eyes. I sang for him, but we sang together in the recurring chorus towards the end of the song. I was afraid of the children’s reaction when changing partners. Unfortunately, my assumptions proved correct during the next game: nobody wanted to shake the boy’s hand. I asked him: “Karol, can I dance with you a second time?” He nodded his head in affirmation. That day I did not make any more attempts to bring the children closer, but I emphasized Karol’s presence in the group and my pleasure in communing with him. I chose him as my assistant for handing out the instruments, he handed the children colorful scarves on my behalf, and I thanked him every time I embraced him warmly.

From that first handshake, all reluctance melted, and tenderness appeared in its place. In the next class, I already knew that the teachers and management had to survive the battle with the parents because separate towels and soap dispensers were requested for each child, even though a disease called “ichthyosis” is not contagious. Fortunately, Karol, sooner than the end of this verbal skirmish, gained the reputation of a nice friend among children. And he was really special: calm, patient, warm with everyone around him. I fondly remember the farewell scene. We all laughed and cried – children and adults.

I think that Karol was at that time a gift from life who mouthed to everyone: “I check”. Life has tested us in such a beautiful way. Thanks to this, we could all learn acceptance, empathy and love.

A virus is checking us today. How do we do in this lesson? I guess very bad …