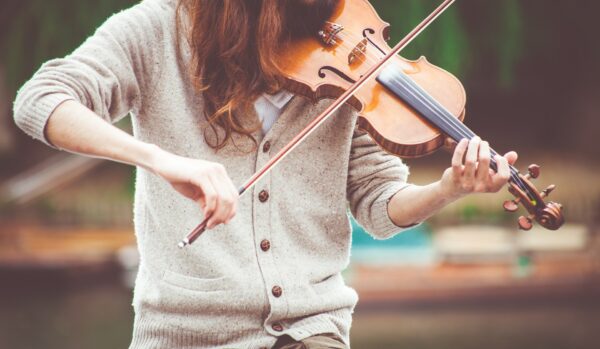 First, a child is born. A father who wouldn’t normally do such things will take the little one to the beat of the music. The mother rejoices when the child begins to sing the first melodies. Grandma pays attention to the sensitivity of the grandchi, and grandpa wonders aloud: “maybe it would be worth sending a little one to music school?”

The girl goes into the adult world and has the impression that everyone delights in her voice, praises for clapping and encourages you to play the instrument. From behind the walls you can hear different new sounds. Everything smells different and invites you to play with music.

Adults say that not everyone has. She is singled out because she can learn the game. They lead it from one adult to another. One smiles, the other strokes his head, another squats at her and gives a welcome hand. During their conversation, the girl can look around the room with instruments. The violin has already been seen and seemed beautiful to her. When adults ask, “what do you want to play?” the little one answers without hesitation: on the violin.

Then he gets a case in which he sleeps a rosin-smelling instrument. He can’t believe his happiness. Until he tries to bring out the first sound. I think only a fat frog has such a squeaking voice. And she will play like that? Wait, right away, the lady showed you how to put the string correctly and how to press your fingers the strings. Oh, how it hurts…

And so it hurts many weeks. Fingers hurt, the back hurts, and the chin hurts the most. Mom sighs, dad eagerly adds: “no exercise! you won’t get a good sound without it.” At the same time, in the yard, girlfriends jump and play together. And the girl stands at the desktop with a fierce face and with increasing anger pulls the string on the strings.

It was necessary to wait patiently until a calm, touching melody flowed from the violin. It is only necessary to improve the vibrating and flażolety and subsequent exams before the committees will cease to be a horror. And so the most important thing seems to be company. There will always be someone to comfort. After all, each of these environments went through the same thing. Well, maybe not everyone, but the vast majority. This awareness comes when a girl becomes a girl.

When a girl becomes a woman, exams become more difficult, but she treats them as further challenges. In college, she feels like she’s in a different world. He meets masters. She begins to feel all her body and soul where she went. It’s a completely different reality. It’s hard to describe it in words. Sounds express more. He prefers to be able to listen and tune in to these unique vibrations. It’s starting to be part of something bigger. With a thrill he accepts part of the responsibility for the formation of magic.

When she receives her diploma, she is proud of the path she has taken. Now he’s going to be a musician and they’re going to start paying her to play. Even when she goes to a wedding, less or more money falls into her pocket. Worse, as they ask to play at the funeral. But in the end it’s a job.

Behind the desktop gives its best. She was taught full commitment, precision and looking for the best sound. When she wears a concert dress she has to forget about everyday life: about the chalk, the ingredients of soup, shoes for the winter, mom’s illness and even her husband’s cochance. It is her curse and salvation. Moving between worlds costs money. However, when he penetrates for good into this specific state of grasp by music, he feels every corner of his body that he lives.

In fact, the instrument doesn’t really matter much. Whether you’re playing on it with a string, whether you need to go to the sheet metal or hit the keys: these are just tools. Everything happens in people’s heads. In their association with matter and the ability to be together. This is the greatest science a woman has received from life. And thanks to this, it continues in the profession. Despite the coronavirus, despite the existence of systems. Thanks to the music.