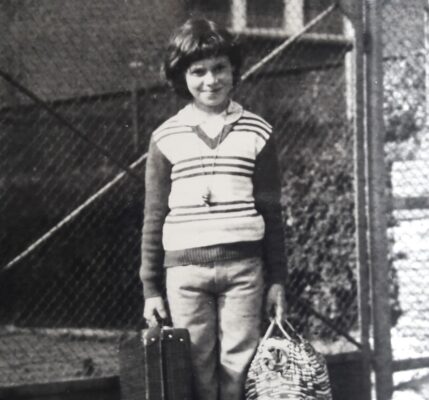 I’m sitting in front of an open suitcase at the hotel. Tomorrow I will close it before flying to a new life. I closed everything I was ready for. I sold what needed to be sold, gave what I wanted to give in the right hands. I listened to what others had to say. I thought about what came to my mind.

I stopped a photograph of a girl holding a suitcase and a net filled to the brim. I was ten, maybe eleven, at the time. It is a pity that I did not write down the dates on the back of the prints as helenka’s grandmother did. In the photo I stand in bell-type trousers and a sweater “in the whee” from under which you can see the rounded collar of a polite girl. On the neck, where I usually wore the key from the house, this time hung a sea shell on the thud. Hairstyle “on pazia” and smiling face do not herald the fear that lurked in his head. Then I went to my first colonies, from which I returned earlier. I became ill with longing and spent half my time in solitary confinement, which further exacerbated the malaise.

At the time, I was not yet ready for independence, but my parents decided otherwise. Even when my mother enrolled me in kindergarten, the teacher was surprised that the mother did not bend down to help tie the shoes of a three-year-old baby with a storm of curls on the head. I crossed the threshold of adulthood several times before I turned 18.

The first step into adulthood is the distinction: “you go to first class so you get the key to the house”. When I put it on my neck in the morning, it was unpleasantly cold, but after a day, when I took it off at bedtime, I put it willingly on my cheek. His warmth encouraged him: “you have me whenever you want to take refuge at home.”

The suitcase on the trip resembled this house. And that I was away from my security zone, I cried when I opened it. Longing did not allow you to enjoy the “new”. Unknown on the one hand, it was terrifying, but on the other it was terrifying.

Forty years have passed. There are no more parents among the living. I open the hotel door with a code. I’m sitting over a suitcase, but I don’t miss it. Thank you for surviving. I look forward to the “new” with hope and excitement. Whatever happens – I can do it.

I put my power, memories and new perfumes in my suitcase. A new fragrance for a new stage of life. I close my suitcase and the past.